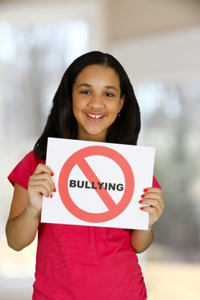 With bullying on the rise, schools and parents are very concerned. Most schools would genuinely like to do something to stop bullying, but they often don’t know what to do. The traditional approaches, like school wide “anti-bullying” campaigns, or punishing the bullies, don’t work. Many school administrators just throw up their hands in frustration and hope the problem will go away on its own. But it doesn’t.

The Parenting Centre proposes a radical model that will change the culture of schools and dramatically reduce the incidence of bullying. The question is whether schools are willing to implement it.

One of our foundational principles is that parents have enormous power to be role models for their children. Dr. Bob Jacobs of The Parenting Centre often suggests to parents “Be the person you want your children to be”, and we have found that actually living your life according to certain principles is infinitely more powerful than lecturing about those principles, or punishing children when they don’t abide by those principles.

The reality is that most traditional schools are based on a model of power and control.The people with power (teachers and administrators) tell the people without power (the children) what to do, and then intimidate, threaten or punish them when they don’t comply. This is the essence of bullying! Traditional schools are inadvertently modelling the very thing they ask the students not to do. It is exactly the same as a parent or adult smoking a cigarette and telling a child it’s the wrong thing to do. Children model the behaviour they see from adults they have to trust. When children see adults use power and control to get what they want from people weaker than themselves, they learn that’s the appropriate way to behave.

Schools have the opportunity to provide powerful anti-bullying role modelling, but they have to be willing to abandon the traditional “power and control” model that has helped promote, rather than discourage, bullying.

Schools who want to stop bullying, instead of just talking about them, need to implement change from the top down. Instead of holding assemblies to tell the students not to be bullies, they need to hold assemblies and announce THEY will no longer bully the students. Administrators and staff can pledge to embrace the following anti-bullying points:

Establish a meaningful grievance process for students who feel they have been treated disrespectfully by a staff member.

The Parenting Centre calls on educators to embrace their role as teachers, and TEACH young people that power and control; bullying; is not the way to interact with people just because they are smaller or weaker. As long as the adults running the schools bully the children, they are only teaching that bullying is an acceptable means of getting what you want.